Get fresh music recommendations delivered to your inbox every Friday.
We've updated our Terms of Use. You can review the changes here.

Guitars That Ate My Brain 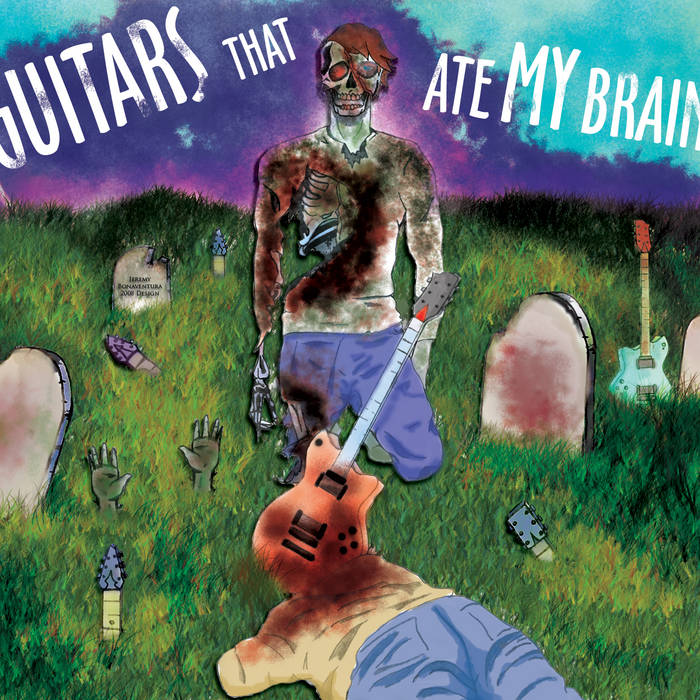 "Guitars That Ate My Brain", a dozen mind-altering instrumentals from today's most accomplished metal axe grinders -- a twelve-headed hydra of monster guitar riffage that slashes, shreds and gnaws its way into your very psyche -- rides the lightning with enough electrifying precision to scorch and scramble your gray matter.

Despite the shifting tempos and uniquely frightening technical prowess of these speed demons, a strange cohesion connects the disparate (some might call them distressing) tracks on this mammoth compilation, as if these explosive, multi-layered instrumentals were largely the work of one multi-dimensional (and quite disturbed) musical personality. In other words, true metal madness.

Paul Waggoner has navigated the fretboard acrobatics of Guitar Gods such as Fripp, Dimebag, Thayil and Corgan. His contribution to these dirty dozen tracks, the quirky high-octane slasher, “Boot Dagger Boogie”, demonstrates once again that he’s one damn underrated and versatile mutha. Waggoner cuts to and fro’ between punk-jazz fusion, something approaching psychobilly, peaceful jazz-inflected interludes and hard-as-nails “math” rock. By mixing and matching music genres in a Zappa-esque fashion (as he has done with Between the Buried and Me), Waggoner takes you on a disorienting, if not perversely enjoyable, musical journey that’s all over the metal map. These boots are made for stalking.

You can almost see the incense smoke rise: this song is ritual, exorcism. Dive bombs of screeching sublimity, haunting/taunting atmospheric voices (beseeching the listener to enter some realm beyond the real), and the clash of Western and Eastern modalities and rhythms coalesce in this skillfully crafted, and compositionally perverse, tune. A word to the wise: enjoy the musical mayhem but don’t delve too deeply into its dark recesses lest you succumb to its power to possess the mind.

Magna Carta Records’ resident shred-head, Canadian Dave Martone, spins an incessant track of total treachery and trepidation. Martone’s screeching and howling performance, balanced by moments of subtle eeriness, conjures images of the heavens opening and a squadron of revengeful angels, armed with rotary machine guns, setting the world ablaze in one final purge for justice. The scorching riffage and deadening rhythmic pounding underscore the unnerving urgency of the tune, which can easily set a secure mind onto the path of slow madness.

Guns N’ Roses guitarist Ron Thal (a.k.a. Bumblefoot) may have been a self-professed misfit earlier in his life, but he certainly has found a home in instrumental guitar music. Of course, that isn’t to say that Thal likes to play it safe, no matter what label is hurled upon him and his music. Expecting the unexpected is something fans have come to enjoy and “Disengaged” doesn’t disappoint. Take note: Thal’s bluesy, slightly Hendrix-esque guitar melodies are lightning bolts streaking through this tension-filled track, freezing its intensity and illuminating its daring, even surprisingly disturbing, sonic qualities. “Disengaged” has a left-field ferocity and utter nakedness that sits alongside some of the guitar hero’s best work.

Also playing on the track: Dennis Leeflang – Drums; Jeremy Krull - Bass, Rhythm Guitars In “The Unwavering Collapse”, Eyal Levi (son of famous conductor Yoel Levi) and Emil Werstler of the Georgia-based band Daath slowly build their double-barreled, six-string harmonic madness to a tense, apocalyptical conclusion. The Daath duo chops through this tiny instrumental metallic symphony with scalpel-sharp precision and a stab of controlled chaos. It’s the musical equivalent of a steadily swaying pendulum relentlessly swooping in for the kill. (This cut’s gonna leave more than just a nasty scar on ya.)

Next up is the dynamic, sonic meal "Artichoke Samurai" from the fleet-fingered Shane Gibson (Korn/Jonathan Davis). Take your average guitar player dude and double -- heck, triple -- his finger speed, dexterity and creativity, and you'll approximate the uncommon fretboard acrobatics, insane tapping, and multiple-string pick sweeps that legions of rabid Gibson fans have been raving about for quite some time. With an almost inhuman precision, Gibson splices and dices slices of Eastern-tinged guitar rock, hypnotic odd-time lead lines, grungy speed metal, atmospheric jazz-rock fusion and high-register, and violin-like seven-string sawing. This mesmerizing musical hybrid will leave you dizzy in disbelief.

This hemispherical guitar workout combines Townsend’s inhumanly pristine technique with a totally twisted sense of humor and emotional depth. It’s as if Townsend, while examining the terrain of his own inner space, subjects his listeners/victims to a kind of sonic mind probe as he drills his luscious, cosmic, and chasm-ic guitar figures into the depths of our very psyches. Upon fade out, Townsend’s final notes echo and repeat in a sonic abyss. What’s in there? Who’s in there? That’s hard to tell, but one thing is for certain: this is your brain on “Devin Townsend.”

Chris Poland is arguably one of the most inventive and soulful metal guitarists of his generation. From Megadeth and Damn the Machine to Lamb of God and Ohm, the resident of “Metalopolis” glides through proto-metal, jazz-metal fusion, and progressive rock with the greatest of ease. Poland’s sometimes hellish tones approximate the anguished cries of a soul tormented and tortured in this life and the next. The Black Sabbath influence here is obvious, but Poland has always been as much about free expression as tried-and-true grungy guitar work.

The unholy alliance of former Soilwork (Ola Frenning) and Darkane (Christofer Malmström) guitarists is a real sleeper of a track. You’re seduced by the slithering sublimity of their interactive and harmonizing lead lines when, at approximately 3:39, the guitarists kick it into serious overdrive, break loose of compositional constraints and let their blistering fingers run like hell over their smoking fretboards. We’re soon suckered by the duo’s lulling, slightly bluesy guitar tones only to be rudely awakened once again by their ferocious display of blazing death metal.

It’s easy to see why Staten Island’s Mike Orlando (Sonic Stomp) was recently chosen as a finalist in Guitar Player magazine’s “Guitar Superstar” contest: his frenzied anthem-esque instrumentals seem to obliterate the wall dividing the patriotic and anarchistic tendencies inside each and every one of us. When hearing these soaring lead lines and rapid-fire beats, it’s hard to decide whether to commit violent acts of revolution or wave a flag.

Straight-ahead, kick-ass fluid guitar work, that has made James Murphy (Testament, Obituary) one of the most well-traveled thrash guitarmeisters of the last three decades. The harmonized lead lines of “Six Shooter” sometimes diverge, leaving us to visualize a yellow-lined highway road winding out of sight. Where you’ll end up is anyone’s guess. Murphy doesn’t so much attack you with his axe as sweep you up in a maelstrom of fury and place you an unfamiliar world.

Successfully combining classical interpretation, fanatical fantasy rock and progressive metal has been priority number one for guitarists Hugues (Hugo) Lefebvre and Yann Mouhad of the French band Anthropia. Though Lefebvre and Mouhad scramble and scatter so many musical reference points in “Schrödinger's Cat Paradox”, they always manage to connect the sonic dots in a cohesive, symphonic and ambitious way. We like to think that Amadeus would have rocked to this if he had had the chance.

2. “The Life and Times of Sir Walter Sickert” - Kris Norris

Thanks to: Martone Guitars recorded in Brainworks Studio. Vancouver, BC Canada
Martone uses...things that make his guitar sound weird

Thanks to: Mike Varney, Shrapnel, and Magna Carta

Chris Poland solos recorded by Randy Pevler at Electropolis Studios - North Hollywood, CA. Thank you to Pete Morticelli and Mike Varney, as well as Bumblefoot for the great backing track.

Special thanks to my wife Allison and our new baby girl, Kaleigh Ann. Also to the Poland and Demmert families as well as all my fans. None of this would be possible without you - many sincere thanks!

Thanks to: My good friend Ron Thal, a/k/a Bumblefoot, for getting me involved in this project and for all the help he always does for me. You are the best buddy.

Thanks to: our partners Irokkoi, B-Stick of Denmark, N.O.S. Amps, Studio Marilyn and our beloved cat, Bagheera.

Magna Carta Records is an independent record label formed in 1989 by Peter Morticelli and his partner Mike Varney. The label has a diverse line-up consisting of musicians from many different genres, but is best known for many of its progressive rock / metal acts. ... more

Bandcamp Daily  your guide to the world of Bandcamp